Renewable hydrogen as an energy vector

Renewable hydrogen is an important energy vector that contributes to decarbonization and is an alternative to storing renewable energy.

What is hydrogen and what is it used for?

Hydrogen is an important energy source used as raw material for the production of petrochemical, steel, glass, and fertiliser products. Each year Spain consumes around 500,000 tonnes of hydrogen produced from natural gas, which itself is not carbon neutral. Practically all this hydrogen is produced in refineries and industrial manufacturing plants, such as those that produce ammonia. Why is hydrogen important in the process of decarbonizing industry?

Presently, industrial sectors like refining, chemical products manufacturing, and metalworking use hydrogen as a raw material. Substituting it with its more environmentally-friendly forms is a highly potential way to decarbonise industry. Furthermore, unlike other renewable energy vectors, hydrogen can be stored and could be the most efficient solution for decarbonising sectors like long-distance transport, maritime transport, rail transport, aviation, and others in industries with high heat consumption.

A zero-emission hydrogen production method that meets decarbonisation targets is required for all of these applications and would obtain a low-emissions energy source that can replace the use of other fossil fuels. What is renewable or green hydrogen and how is it obtained?

Renewable hydrogen, or green hydrogen, is produced from renewable electricity through various processes such as electrolysis, photoelectrocatalysis, and using organic materials. Electrolysis is a sustainable technology that decomposes water to produce hydrogen and oxygen. 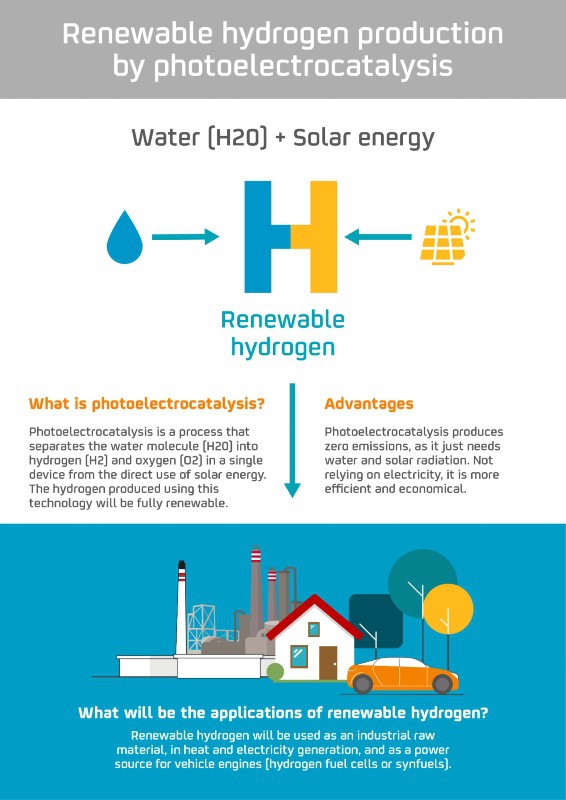 How many types of hydrogen are there? The hydrogen "colours"

Some are newer than others, and some are more efficient at decarbonisation. Depending on the raw material used and the CO2 emitted, we can define several types of hydrogen (in addition to green hydrogen, which is renewable):

Why is renewable hydrogen important?

Green hydrogen is set to be one of the main energy vectors of the energy transition in the long term, given its production and consumption are climate neutral, and it does not emit greenhouse gases.

Its storage capacity means that we can set aside any excess renewable energy to be later used when renewable energy sources are not available, meaning it can serve as a giant fuel battery. In addition, renewable gases, especially hydrogen, are especially relevant for decarbonising industry since their ability to produce very high heat makes them ideal for industrial heating needs. They can also be used as raw materials in the chemical, oil refining, fertiliser, and metallurgy sectors.

So that all renewable or green hydrogen can fully reach its potential, we must first overcome many challenges. Since it has a relatively low technological maturity, one of the main challenges for research and technological development in the coming years will be the need to continue advancing toward a competitive, low-cost, and highly-efficient technology.

Along the same line, we must develop the hydrogen economy value chain and position Spain as a technological leader. For this reason, several large projects and public-private investments aimed at bolstering the hydrogen value chain and its associated technologies have been announced in recent months. The goal is to guarantee the further development of this element and convert it into one of the key components of the energy mix of the future.