What is distributed generation?

Traditionally, electricity in Spain and in the world is generated by large centralised power plants located far from consumption centres and is subsequently transported over high- and medium-voltage lines spanning distances of hundreds of kilometres until reaching the end user. This type of system is known as Centralised Generation.

This is due mainly to economic, safety, and environmental factors that require situating the facilities near the source of the energy resources. For example, hydroelectric power plants have been built on large reservoirs, wind power generation is carried out on extensive areas of land with large wind turbines, and fossil-fired thermal power plants are built far from consumption centres for environmental pollution reasons.

Since the inauguration of the world's first power grid, attempts have been made to find a different form of generation whereby humans could generate and consume their own energy at nearby points, without it having to be transported hundreds of kilometres. However, this solution was not profitable for many decades.

Distributed generation is currently a reality and is becoming more and more widely accepted, with major advantages. Through it, users generate, consume, and sell energy to the grid.

Distributed generation is the use of energy resources located in small power plants close to demand or at the consumption points themselves.

By generating power very near the point of consumption, power losses during distribution are reduced. For example, electricity or hot water can be generated on roofs of houses, or heat for hot water or heating using geothermal systems installed in building foundations.

Distributed generation is directly related to small-scale photovoltaic or thermal generation in cities and, therefore, to self-consumption in buildings.

In addition to small-scale photovoltaic, thermal, and wind energy generation, we can include distributed cogeneration within distributed generation, in which electricity and thermal energy are generated in the form of steam or hot water, and trigeneration, which also generates cold. This type of generation takes place mainly in industrial centres or in housing districts with local electricity, heat, or cold distribution grids. It is also worth highlighting the new smart grids, which make it possible to respond to fluctuations in energy production and demand on the spot.

From the system management point of view, electricity self-consumption allows the end consumer to make the most of the energy resource, thereby reducing difficulties between power supply and demand management.

What are solar energy communities?

An example of the different options of distributed generation would be the design model of energy communities in urban areas.

Solar communities consist of a group of self-consumers who make the most of electricity produced by solar panels installed on roofs of buildings within the area. They are protected by the regulatory change made in 2019 which allows supply points located within 500 metres to connect to the generator. In this way, households, schools, shopping centres, and big-box stores can connect to self-consume and enjoy 100% renewable electricity.

To this end, the photovoltaic facility feeds the electricity it produces to the grid and it is virtually distributed among the self-consumers. 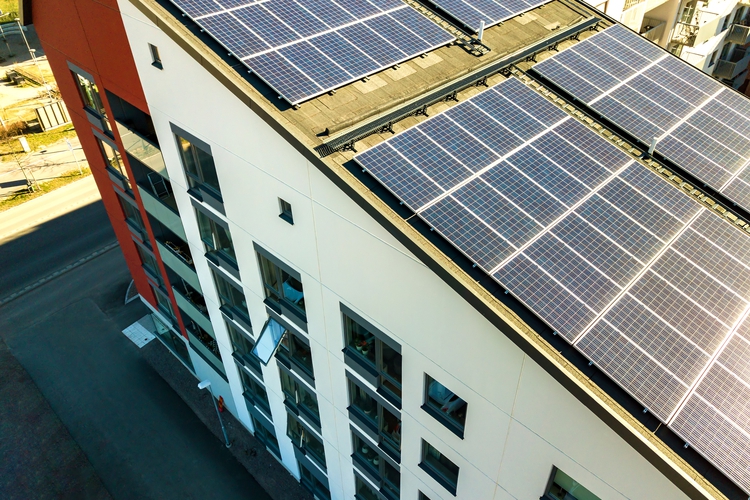 Solar communities generate local and renewable electricity in urban areas. They bring the source of solar energy generation closer to the point of consumption.